The Southern Conference has been known for decades for their high academic standards, tremendous faculty, staff, and their nationally recognized athletic teams. But SOCON is known for so much more as they bring their highly contested conference basketball championships to Asheville each March.

Not only to bring excitement and a top level of competition of the men’s and women’s basketball title to the Harrah’s Cherokee Center but they also show what true champions they are.

Each year, Southern Conference Basketball joins Eblen Charities, Ingles Markets, and area host hotels in collecting food for the Hoops Against Hunger program. This year, ten hotels will be collecting food for families adversely affected by the pandemic.  All donations received will go to the Buncombe County Resource Center at Enka Middle School.

We are excited to see the 2022 Hotel Challenge to return to form as the previous competition in 2020’s 3rd annual Hoops Against Hunger Hotel Challenge brought in a record amount of food for kids who may not have enough to eat while away from school on Spring Break.
More than 10,000 snacks and meals, nearly 5000 pounds of food were collected at the hotels and the Ingles SoCon Basketball Tournament.
We would like to thank our partners who make the Hoops Against Hunger Program possible: Ingles, Southern Conference, iHeartMedia Asheville, WLOS, Asheville-Buncombe Regional Sports Commission and Explore Asheville. 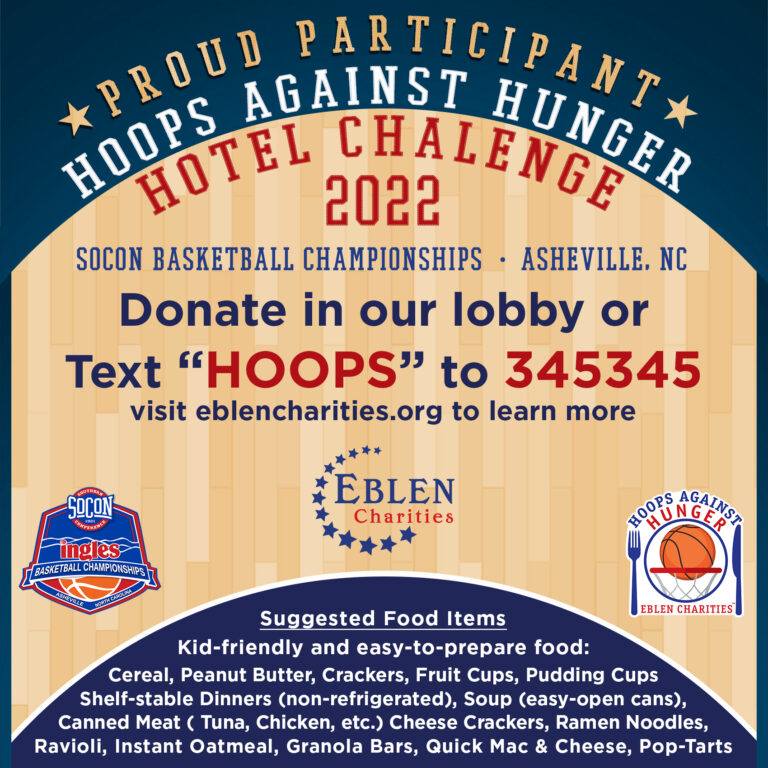