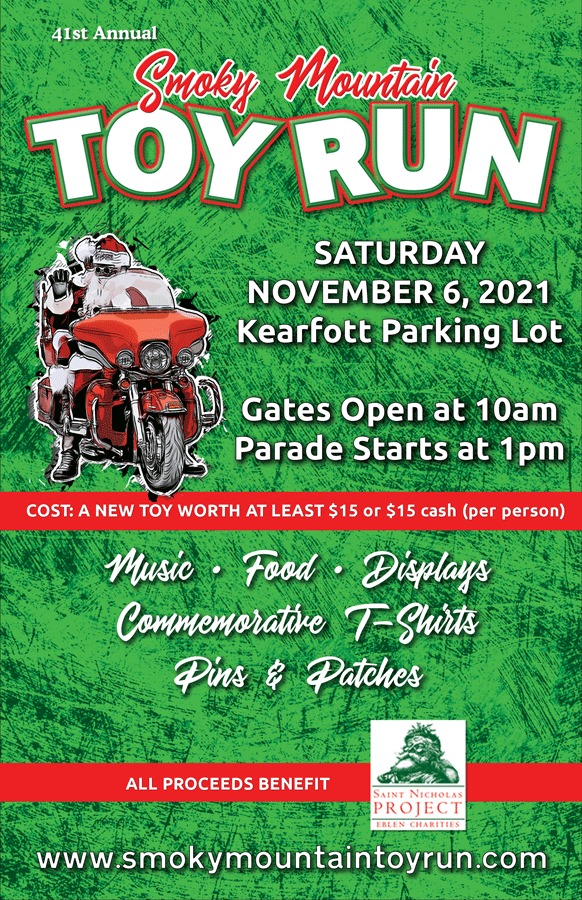 The Smoky Mountain Toy Run is a police escorted motorcycle parade to collect toys and money for Eblen Charities Saint Nicholas Project who then distributes them to needy families in our area during the Christmas season. Started in 1981, the 2021 edition celebrates our 41st year of helping kids and families in need and is the oldest Toy Run in North Carolina and one of the oldest on the East Coast.

Requirements to ride; a toy worth $15 dollars or a $15 dollar donation per person. All brands of road worthy motorcycles are welcome to participate! No preregistration required if you just want to ride in the parade.

There will also be music, food, commemorative t-shirts for sale, displays, 50/50 and lots of fun.

It was December 19, 1981, 12 bikes and about 30 people met at the Executive Club on US Hwy 70 in Swannanoa for the first Toy Run. The weather was a balmy 20 degrees as this hardy group of elves packed up and headed to Santa Pal Headquarters bearing gifts and money. This small band of Toy Run pioneers operated each succeeding year under the rallying cry, “For Americans Who Need – From Americans Who Care.” Ideas flowed and every year the Toy Run grew in participation. The original name of the Toy Run was; “Toys for Tots Motorcycle Run” and like today, was solely operated by volunteers.
The 1982 Toy Run had 85 motorcycles and 100 riders. It rained in 1983, but even in the rain, 55 motorcycles participated with almost 100 riders and passengers. People lined Hwy 70 to witness the parade. A tradition that remains to this day. Local newspapers wrote stories about these leather clad elves, and television stations showed bikers having a positive impact in our community. More importantly these bikers experienced the joy of knowing that for one day in the year they set aside their differences and joined together for a common cause which brought joy and happiness for needy children throughout Buncombe County. It didn’t matter what brand of motorcycle you rode, or what group you were affiliated with, only that you cared enough to participate and give.
For the first 15 years the Toy Run operated through a loose knit group of volunteers, all with the same mission in mind, “FOR THE KIDS.” In 1996 the Smoky Mountain Chapter of the Harley Owners Group made the commitment to become a primary sponsor and to begin the daunting task of helping organize, plan and implement the former Toys for Tots Motorcycle Parade. Together, the Toy Run founders, Gene Lummus and the Smoky Mountain HOG Chapter presided over some of the largest Toy Run’s Buncombe County ever witnessed.
Through the years the name of the Toy Run has evolved from the original name to the present; “Smoky Mountain Toy Run”. Today the Toy Run operates under a corporate charter and all proceeds benefit Eblen Charities Saint Nicholas Project.